Press release from the issuing company
Fujifilm’s foray into metal decoration has been given a significant seal of approval as one of Europe’s biggest independent metal packaging printers agrees to inkjet development partnership
Inkjet technology pioneer, Fujifilm, has agreed to an ongoing partnership with the UK’s largest specialist metal packaging printing firm, Tinmasters. The agreement will see Tinmasters install a Fujifilm Acuity B1 UV inkjet printer at its premises in south Wales. The machine will be used for short run and customized commercial work and Fujifilm will retain access for customer demonstrations and ongoing development work. 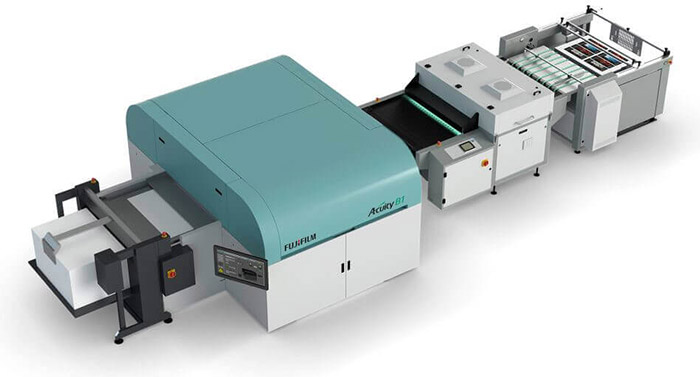 “Run lengths are coming down across the industry,” says Tinmasters CEO Richard O’Neill. “We’ve long known that investing in a digital solution to respond to this was going to have to happen at some point. We just haven’t seen anything out there, as an off-the-shelf product, which does everything that we would ideally want it to. We made a significant investment in 2018 in a highly automated litho press to try to meet the growing challenge posed by shorter run lengths – but the trend is accelerating and digital was going to have to start to play a significant role in our response to that at some point.
“It was the exceptional print quality and registration from the Acuity B1 that drew us initially to Fujifilm. However, the partnership angle of the agreement is crucial,” O’Neill continues. “Inkjet is completely new to us, and what we’re learning very quickly from Fujifilm is that it has the potential to be much more than simply a cost-effective way to print short runs. It also offers huge advantages in achieving color consistency across jobs and in experimenting with creative applications and special effects, such as using ink layering to get textured finishes – something only possible with UV inkjet technology. At the same time, Fujifilm is new to metal decoration, so given we’ve been printing on metal since 1909, there’s a lot of expertise we can offer to help them to adapt their inkjet solution to better meet the needs of the industry.
“Ultimately, this partnership for us is about better serving the needs of our customers and we’re confident that we’ll immediately be able to present them with some innovative solutions to common problems and challenges. Already we can see value in the Acuity B1 for very short run work of less than 500 sheets, and for sampling, customization and special effects. In the longer term though, as we work with Fujifilm to increase the speed and improve the handling for metal, I think we could see digital used to take on work in the 500 to 5,000 sheet range. So this for us really is a long term commitment, it’s not about the next year, or even the next few years, we’re thinking about the next decade and beyond. We think inkjet is going to be a big part of the future of metal dec, and by getting in early we want to help to shape what that future looks like, and become a real technology leader in the industry.”
Kevin Jenner, Business Manager, Industrial at Fujifilm Speciality Ink Systems adds: “I think the transition from analogue to digital in metal dec is a couple of decades behind the graphics industry, where we’ve been developing and refining our inkjet technologies for 20 years. It’s quite a homogeneous market, with all of the major players producing very similar applications with similar kit so it represents a unique opportunity
“At Fujifilm, we know a thing or two about transitioning from analogue technologies. We’ve done it ourselves in our own business and we’ve worked with countless printers in the graphics sector who have moved, in whole or in part, away from litho and screen technologies to embrace the potential of digital.
“Having said all of that, we recognize that we’re comparative newcomers to the metal dec sector and, though in the Acuity B1 we have an inkjet machine with enormous potential, we still have a lot to learn. So who better to learn from than a metal printer with more than a century of experience and heritage to draw on? Together we want to fully exploit the technical capability of the current platform and, looking to the future, develop the machine into an even more exciting commercial proposition – increasing its speed, improving its handling ability and developing inks that will comply with the most stringent international food safety standards.
“There is in the industry, we believe, a tremendous latent demand for the short run work, creativity and customization that inkjet allows, but in many cases neither the canmakers nor designers know that those possibilities exist – so they’re not asking for them. When they do start asking – and they will – we’ll be ready, and together we look forward to shaping a future of possibilities even we haven’t dreamt of yet.”